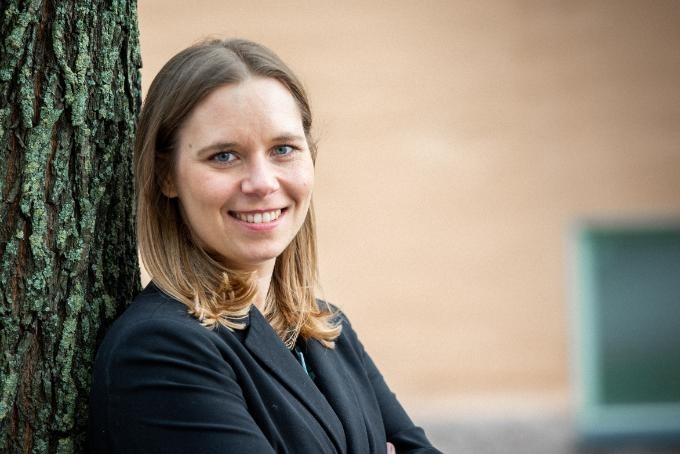 Stephanie Winkler’s PhD thesis explores how the concept of soft power has developed over time and shaped world politics.
"I show that academic concepts not only describe the reality, but that they have a real impact and contribute to shaping the development of politics", she says.

How can we understand the role and consequences of concepts in international politics? In her PhD thesis Stephanie Winkler, doctoral student in political science at the Department of Security, Strategy and Leadership at the Swedish Defence University, examines how actors coin, use, revisit and promote the concept of soft power in anticipation of performative effects.

Soft power is a relatively new concept developed by the political scientist and Harvard professor Joseph Nye in the early 1990s. According to the original definition, the term describes the ability to change someone's decisions or achieve what one wants through attraction rather than through coercion.

"You have different kinds of power to use in order to get others to do what they wouldn’t do otherwise. For example military power and economic power. Another way, which is far less expensive and not as controversial, is if you get others to want what you want through attractive values, your foreign policy or your culture. That is the idea of soft power", says Stephanie Winkler.

In her PhD thesis, she analyses the concept's origin, how it has developed over time in different parts of the world and shaped debates and practices of foreign policy in the context of the ongoing power shift between the Unites States, China and Japan.

"I show that academic concepts not only describe the reality, but that they have a real impact and contribute to shaping the development of politics. It’s not just a label that describes a certain phenomenon, it is very important for how people understand their environment, how they act and in the long run shape their policy", she says.

The research is based on an initial bibliometric analysis of the concept of soft power.

"I have looked at the ways in which the concept has emerged in academic articles, who wrote it, who cited it and who are the most influential authors, with the purpose to gain a birds eye perspective on where the concept has travelled and what we can learn from looking at it from above."

The bibliometric analysis was followed by extensive fieldwork in the US, Japan and China, including more than 80 interviews, participant observations and document analysis.

"I interviewed the most influential researchers, journalists, and policy makers about how they came into contact with the concept, what it means to them and how they have promoted it. I noticed a lot of different answers to those questions and the concept emerges in different debates that often doesn’t have much to do with what I had expected."

From an American perspective, for example, the concept has made it possible to think about shifts in power, where it is not necessarily worrying when states such as the United States and Japan are in decline, as long as it doesn’t occur in all areas and affects soft power. And in China they put a lot of effort into to redefining soft power so that is means cultural attractiveness instead of values.

"It is fascinating to see how the concept broadens, narrows down and evolves. It opens up a more frank discussion about the role that academic concepts play in questions of security and politics."

Stephanie Winkler is a doctoral student in political science at the Department of Security, Strategy and Leadership at the Swedish Defence University. She is defending her PhD thesis “Conceptual Politics in Practice: How Soft Power Changed the World” at the Department of Economic History and International Relations, Stockholm University.

New cooperation between Sweden and Finland to strengthen civilian emergency preparedness A new cooperation programme between Sweden and Finland will strengthen the countries’ crisis management capabilities and civil def...
Peter Haldén receives this year’s Hugo Raab Award Peter Haldén, Associate Professor and Senior Lecturer in War Studies has been awarded the 2020 Hugo Raab Award, the Swedish Defenc...
How can compliance with the law of armed conflict be improved? In a recently published article in the Yearbook of International Humanitarian Law, Jann Kleffner takes the 70th anniversary of the...