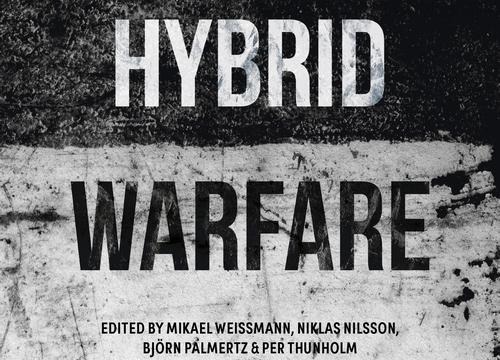 The anthology Hybrid Warfare - Security and Asymmetric Conflict in International Relations examines different aspects of hybrid warfare and hybrid threats.
"With this book, we want to provide a comprehensive understanding of the phenomenon and contribute to the discussion on how we can deal with this type of security problem", says Niklas Nilsson.

"Hybrid warfare and hybrid threats are not really a new phenomenon, but it is something that has become more topical and has gained a prominent role on the Swedish as well as the international security agenda in recent years", says Mikael Weissmann, Associate Professor in War Studies at the Swedish Defence University, who is the editor of the anthology together with Niklas Nilsson, Björn Palmertz and Per Thunholm.

"Much of what has been written in the field so far is about how to understand the phenomenon and what the threatening actors do when they engage in hybrid warfare. We therefore saw a need for a book that takes a step beyond this and focuses on the big picture, how we as a society deal with this problem", says Niklas Nilsson, Associate Senior Lecturer in War Studies.

The book is aimed at both academics and practitioners in the field and shows the breadth of phenomena that occur in the area.

"We look at general aspects of hybrid warfare and hybrid threats and how to deal with them, such as intelligence cooperation, influence operations, cyber warfare and the role of the military in the grey zone. We also have chapters on how a number of key Western actors such as NATO, the US, and the EU view this type of threat, as well as chapters analysing various recent cases focusing on the Baltic States, Ukraine, and Iran, among others. We conclude with a chapter proposing a new model for understanding the dynamics of hybrid warfare and hybrid threats", says Björn Palmerts, former Senior Analyst at the Centre for Asymmetric Threat and Terrorism Studies (CATS) at the Swedish Defence University. 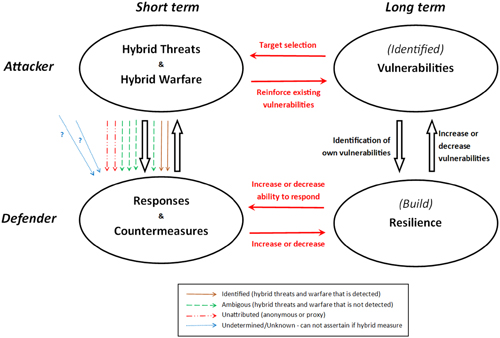 In the final chapter of the book, Niklas Nilsson, Björn Palmertz and Mikael Weissmann present a model - the Hybridity Blizzard Model - for what the relationship between defender and attacker can look like in the short and long term, and how the different time and actor dimensions interact.

"We want to contribute to a holistic understanding where you see these different phenomena as part of a larger security problem, where there is a context regardless of which parts you choose to look at", says Niklas Nilsson.

Interaction between theory and practice

Björn Palmertz agrees and points to the importance of collaboration:

"These kinds of challenges cannot be dealt with in a piecemeal fashion in society if we are to protect ourselves and build an improved national security capability. This is why this book, written by both researchers and analysts, is an example of how we can have interaction between theory and practice to better understand different areas."

The book Hybrid Warfare - Security and Asymmetric Conflict in International Relations is published by the academic publisher Bloomsbury and can be downloaded from the publisher´s website.

Brigadier General Anders Persson appointed Deputy Vice-Chancellor for the Swedish Defence University The Swedish Defence University's Vice-Chancellor has appointed Brigadier General Anders Persson Deputy Vice-Chancellor, and thus t...
New study on narrative-based influence operations Influence operations can be effective even when the disseminated message is not logical or consistent with the recipient's previou...
How scientific ideas are reflected in practices of war The second edition of Antoine Bousquet’s book The Scientific Way of Warfare: Order and Chaos on the Battlefields of Modernity h...