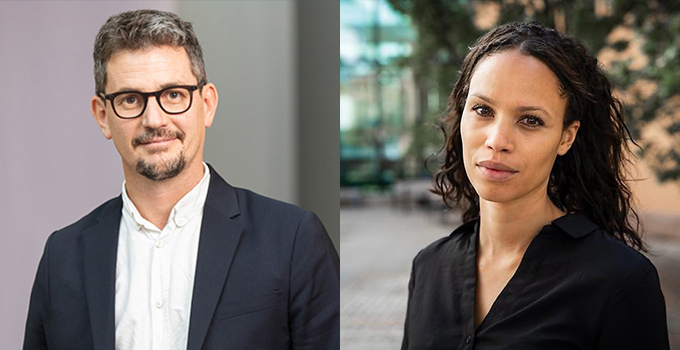 The Hugo Raab Award 2021 to Mariam Bjarnesen and Linus Hagström

Mariam Bjarnesen, Senior Lecturer in War Studies, and Linus Hagström, Professor of Political Science, have been selected as the 2021 recipients of the Hugo Raab Award, the Swedish Defence University's prize for outstanding scientific work.

Mariam Bjarnesen receives the award for her book Repurposed Rebels: Postwar Rebel Networks in Liberia, published in September 2020 by the University of Georgia Press. The overall theme of the book is intrastate conflict and the impact of war on the individual. It takes its cue from the 14-year civil war in Liberia, which officially ended in 2003, and examines how former rebel soldiers are using their networks to find new roles in post-conflict society.

True to the area-studies tradition within which this book is situated, Mariam Bjarnesen provides an in-depth understanding of a case. The research contributions are mainly empirical and practical relating to the area to which the case study.

In terms of scientific craft, this book demonstrates that Bjarnesen has an excellent understanding of the context and the arguments pertaining to rebels and DDR both theoretically and empirically.

"It is such a great honour to be one of this year's recipients of the Hugo Raab Award from the Swedish Defence University. Being nominated by my colleagues, and also the nice review I received from the external jury is of course touching. The book is based on interview material from field research in Liberia between 2009 and 2013, and it is very important to me. I had the privilege to follow some of these individuals for many years. I hope that I have been able to maintain that trust with this book", says Mariam Bjarnesen, and continues:

"I personally believe that one of the most important contributions of the book is that through the experiences, perceptions and challenges of these individuals in finding a new role in society, we can approach a more nuanced picture of what it means to be a former rebel soldier in a marginalized post-conflict society. The book also challenges the belief that the internationally driven and funded processes of reintegration are the key to stable post-war societies. The book is an attempt to understand the dynamics that allow former insurgents to stay together after war, and the risks this can pose, but also to challenge dominant ideas about these individuals as a threat to sustainable peace."

Linus Hagström receives the award for four scientific articles in which he explores how and with what security policy consequences leaders and populations spread narratives about themselves and others:

The oeuvre Linus Hagström presents us with, testifies to the breadth and productivity of his scholarship. Publishing four articles in highly ranked, peer reviewed journals within a year is quite a remarkable achievement, even taking into account the travails of the publication process.

The articles are all exceedingly well crafted, each articulating a specific contribution to a specific theoretical literature. In each article Linus Hagström (and his co-authors) articulate a practical implication of their finding and so remain within the style commonly adopted by IR scholars.

"I am delighted to be awarded the Raab Prize, especially considering that I have not published a book, like previous winners and Mariam Bjarnesen, with whom I share this year's prize. Since I started working at the Swedish Defence University six years ago, I have explored many different themes in some 20 scientific articles. I like the article format because it has allowed me to learn and test a range of concepts, theories, methods and genres, and to publish my research in journals with diverse readership", says Linus Hagström.

"The fact that I am awarded the prize may strengthen the position of the article format at the Swedish Defence University and possibly inspire others to work in this way. Having said that, I myself plan to write books in the future", he continues.

"The prize is important as it highlights our research and the talented researchers we have at the Swedish Defence University. It is a good sign that we have two winners this year, as the experts were unable to select only one most outstanding researcher this year. The experts point out that their research is well conducted, with theoretical contributions as well as practical application", says Malena Britz, Pro Vice-Chancellor and Head of Research at the Swedish Defence University.